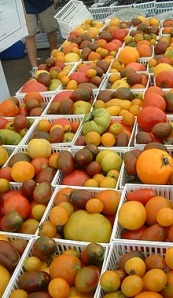 For the past 12 years, Stuart Collins and his partner Terry Stewart have been growing certified organic heirloom vegetables near Shawville, Quebec for their ever-expanding army of home-delivery customers. They also supply the supremely colourful, vitamin-packed and beautifully mis-shapen vegetables (golden carrots, candy striped beets, purple cauliflower…) to the city’s most discerning chefs and restaurants including The Rideau Club, Murray Street, and Les Fougères.

The last time I took the hour-long drive into the beautiful Pontiac region to pay a visit to the farm, it was five years ago. I was struck then — as I am now — by the extent to which everything (and I mean everything) is done by hand. I’ll never forget the experience of crouching down on my knees, scissors in hand, and clipping individual leaves of baby lettuce — one by one — for the salad mix. When temperatures drop in November, the lettuce “production line” moves indoors. On my Monday visit to the farm, I see hundreds of small planters bursting with green leaves lining the full length of the enormous greenhouse. It is quite spectacular to see all of that vibrant, green “life” in contrast to the bleak snow-covered landscape outside. These are still the babies of Bryson Farms and it was nice to see that they are nurtured, coddled, and cared for as they were five years ago.

After a brief tour of the greenhouse, Collins began telling me about an exciting new project he has been cultivating at the farm. It is something that is challenging him in ways he could never have imagined: frozen vegetables.

Collins has been thinking about frozen veggies for the past three years. It’s a brilliant idea whose time has come. He built an industrial kitchen in a trailer on the property, purchased new and used food processing equipment (a flash-freezer and an Italian “tomato squeezer” are now among his prized possessions) as well as several trailers for cold storage. These days his crew arrives each morning to wash and sort vegetables for the delivery baskets while others are busy in the kitchen processing everything that has been picked or pulled from the ground in recent weeks.

What it means is that customers can have access to local organic vegetables all year round. It’s a locavore-in-a-cold-climate dream-come-true.

Perhaps more than anything else they grow, Bryson Farms is synonymous with sweet juicy heirloom tomatoes. The farm grows tons and tons of them, but the tomato is a fragile fruit and a staggering amount would always end up rotting in the compost pile. This year, Collins began “transforming” the tomatoes as quickly as possible into frozen roasted tomato sauce, plain roasted tomatoes, and heirloom tomato tarts. On the day of my visit he was perfecting the recipe for tomato soup. His kitchen crew had also been busy making fresh vegetable stock, vegetable stew, and vegetable soup. Everything was being flash frozen and portioned so that it is easy to thaw, simmer, and eat.

Collins has been experimenting for years to perfect his sweet corn, planting different varieties until he came up with what he feels is the sweetest and most delicious corn imaginable. He laughs when he recalls the frenzy of activity when the corn was being harvested: a crew was picking, another was shucking and another was in the kitchen boiling and cutting off the kernels and then immediately freezing them. I took home a package of Bryson’s sweet frozen corn and it seemed as if the rays of late summer sunshine could be tasted in every bite.

Home delivery customers are going to start receiving these frozen vegetables in the weekly delivery boxes. The frozen products will also soon be available at various Ottawa food retail outlets.

Between the work involved in satisfying the health department, the organics certification process and the Canadian Food Inspection Agency, Collins has signed himself up for a ton of paperwork to keep the new arm of the business on track. “This is the most exhausting project of my life,” says Collins with a huge grin. It’s obvious he has found yet another labour of love.